Hurrah for the Purple Poofters. The front page of today's paper carries the happy news that Colchester Royal Grammar School won the Times Spelling Bee competition yesterday, sealing the title by spelling "chrysalis" correctly. As an Old Colcestrian, I'm delighted and more than a little envious.

No Spelling Bees in my day, not even a Spelling Gnat, but being able to rite propa was drilled into us from the first year with Mad Fred Evans, the Cuban heels-wearing chemistry teacher and first-form master, setting us weekly spelling tests after taking the register. Chrysalis (not to be confused with crystal) was a Fred favourite.

I am always grateful that I had the chance to go to CRGS, a state school in name and funding but a private school in output and ethos that regularly spanks the top fee-paying schools in the exam league tables. It was good in my day, with 13 pupils in my year of 100 going to Oxbridge, but is now jaw-droppingly good. Last year, 41 CRGS pupils were offered places at Oxford or Cambridge.

Opponents of grammar schools hate it because it creams off the brightest children at 11, weakening the quality of the other schools; others argue that it gives a chance purely on the basis of intelligence rather than class or the state of their parents' bank account. It is elitist, but based on potential and ability rather than money. Why is that a bad thing?

Anyway, the pupils suffer in other ways thanks to the distinctive purple blazer, with French mottoes on the breast pocket depending on house. It made you stand out in Colchester; since it is a garrison town that was not necessarily a good thing. "Purple poofter" was a regular shout from the oiks at the comprehensive school. They were probably just jealous. Most of them couldn't even spell poofter.
Posted by Paddy at 10:14 am 5 comments: 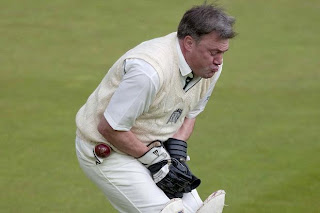 They say that you should never meet your heroes, but it is also wise not to meet your bogeymen in case you find that you quite like them.

So it was when I interviewed Ed Balls in the Lord's pavilion yesterday and discovered that we were both teenage cricket geeks.

I should loathe Balls, the former right-hand man to Gordon Brown. He has a reputation as an arrogant bruiser and a bully and I imagine that there is little in politics on which we would agree.

Except that for a pleasant half an hour, he talked with passion and enthusiasm about boyhood days spent playing dice cricket and impersonating Derek Randall. Guess he has some redeeming features.

I went to interview Balls because he was keeping wicket for the Lords and Commons team against MCC, but the Shadow Chancellor was all over the papers for plots and intrigue yesterday morning so The Times also dispatched Roland Watson, our political editor and a decent cricketer himself, to ask about leaked memos.

We wrote up the interview for a piece in the Times today, but there was a fair bit that didn't get in about Ed Balls's schooldays that I think is worth sharing, if only because it reveals an obsessive and rather sad fascination for cricket and maths. This is the tale of the making of a Treasury wonk.

Like many slightly nerdy teenaged boys, the young Balls loved cricket but could not play it. He never bowled for his school team and batted at No 11, but when it came to playing “dice cricket” in his bedroom, Balls was a master.

“I developed my own version and played games between England and an All Star XI using a scorebook I bought from Trent Bridge,” the Shadow Chancellor said. “My system was quite sophisticated. You rolled dice to see what the weather was like and used grids that attempted to simulate different kinds of play, like if it was a batter's day or a spinner's day.” 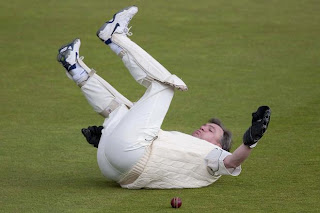 He admits that playing the games was “quite a chore” as he rolled the dice over and over to replicate a Test match. What excited him was what happened after the match.

“I would get to the end and recalculate by hand all the averages for the players,” he said. “I would write them out in order and then repick the teams and start again.

“The thing I really loved was doing the averages. I would get through the game as quickly as I could so that I could do them. The only thing is that England tended to do well so I think the dice may not have been rolled completely fairly.” He added that on family holidays he used to hope it would rain so he could stay indoors and play.

It brought back my own memories of playing "calculator cricket" in maths lessons, using the random number generator. Like Balls, I also drew up my own eventualities tables to reflect weather, pitch and momentum in the series. God, I was quite a sad little character.

The first Test match that Balls saw was the great West Indies side in 1976 at Trent Bridge. His hero was Randall, the madcap England batsman who was noted for his eccentric behaviour at the crease and his fielding acrobatics.

“We wanted to be like him at school,” Balls said. “We spent ages practising running, picking up the ball and throwing it at the wicket. We were the most exhibitionist team around and when we batted we would stand at the crease continually fiddling.”

Alas, we had little chance to watch the Balls fiddling yesterday. Only 11 overs were possible in the match, the first time the annual game had been played at Lord's since 1939.

Having been driven off once by a heavy downpour after 40 minutes, they emerged tentatively after lunch but rain started falling as soon as the covers were removed. The match was abandoned at 4pm; the gods had seen enough of Balls's wicketkeeping.

It was just long enough, though, for Danny Alexander, a left-arm medium-pace Cabinet minister who shared the new ball with Jo Johnson, MP for Orpington, to trap one of the MCC opening batsmen leg before wicket.

The Shadow Chancellor was the first man to shake hands with the Chief Secretary to the Treasury, all rivalries forgotten in the name of sport. "He told me 'God this is probaly the only time you'll ever be able to congratulate me for something'," Balls recalled as rain teemed down outside. "I said I was slightly worried that it was going too far down the leg side to be given out."

Alexander was lucky that the batsman hadn't edged the ball behind for Balls to catch given his rather feeble efforts at taking the ball in his gloves. "More goalkeeper than wicketkeeper" was his own honest assessment. "I'm just relieved I didn't drop any catches," he added.

Instead of sledging the opposition, Balls and his slip cordon, the Tory MPs Crispin Blunt and Matthew Hancock, made cracks at their team-mate, John Redwood. It is probably the only time Balls and Redwood have found themselves on the same side.

"In 1997, I played for the journalists against the MPs team and hit three fours off Redwood in an over," Balls recalled. "That's the highlight of my cricketing career. I got 25 or so that day. John and I have always got on fine." 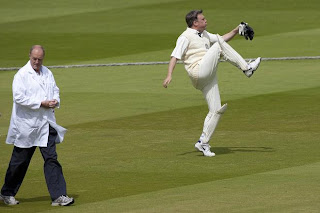 The 11-year-old Balls went along eagerly to nets at his secondary school, hoping to impress the master in charge. Afterwards, they gathered round and the teacher told them that one boy had stood out above the rest.

"For a fleeting second I thought it could be me," Balls said. Instead, it was James Morris, the man who captained him yesterday and whose day job is as Tory MP for Halesowen and Rowley Regis. Balls was the token Labour MP in the team.

Balls admits that it was a dream to get changed in the away dressing room where Sri Lanka had prepared for last week's Test match and the name of their captain, Tillekeratne Dilshan, had been freshly painted on the honours board after his century. "We all looked at the honours board in disbelief," Balls said. "Cricket always has more reverence for history than other sports.

"When I watched TV as a boy, they would show classic moments on TV during the rain. To be in the place where it all happened, the sense of history and majesty about it, is different to anywhere else." Except, some may argue, the Houses of Parliament. It is easy to be blase about a place that you visit every day.

[pics by the estimable Graham Morris]
Posted by Paddy at 5:46 pm 1 comment:

Fox News had a little difficulty this week in telling the difference between fantasy and reality. Well, more difficulty than usual.

An item on Sarah Palin's voyage round America's tourist sites, amending Wikipedia as she goes, featured an image of Tina Fey, the star of 30 Rock, spoofing Palin on Saturday Night Live in 2008.

Apparently the producer who boobed has been disciplined, but probably not in a good way. Palin is not only Fox's poster girl, but since last year she has provided political commentary for the station. It should not be difficult to tell her and Fey apart. For a start, Fey's Palin is rather more foxy than Fox's Palin.

Fey recently reprised her Palin on SNL, having a pop at "the lamestream media who twist my words by repeating them verbatim" and promising to run for office every four years. "This is my Olympics, and I'm gonna win a whole bunch of silvers," she said.

The world will be hoping that Palin does have a crack at the White House next year, if only because it will raise the quality of satire. Sending up Tim "Call me Tim" Pawlenty is not quite the same.
Posted by Paddy at 2:19 pm No comments:

A smug of iPads

Via the Guardian's Mind Your Language blog, I've discovered the wonderful All Sorts website, which exists to catalogue and create collective nouns for objects in modern life.

The Grauniad was seeking a collective noun for iPods and suggested "a rectangulation", which I rather like but not as much as the almost perfect "a smug of iPads".

The most popular suggestion for a group of journalists is "a gutter", although I like whoever suggested "a scoop" and, with a nod to those sadly-now-gone days of legendary lunches, "a bevvy". Sadly, "a redundance of journalists" may be gathering momentum.

I'm also very impressed by the suggestions for a collection of tweets - a failwhale or a boredom being the best - while top marks must go to "a wunch of bankers" (think about it...), "a sneer of critics" and, to quote Brian Sewell, "an arse-fuck-cunt of Tourette's sufferers".
Posted by Paddy at 2:20 pm No comments:

"That's a Smith & Wesson and you've had your six"

There's a fabulous piece of correspondence on the Letters of Note blog about James Bond's "rather deplorable taste in firearms".

A gun expert, Geoffrey Boothroyd, wrote to Ian Fleming in 1956, praising his books but saying that the .25 Beretta that Fleming had given to Bond was "really a lady's gun, and not a really nice lady at that". Boothroyd went on to suggest other guns that the secret agent could use instead.

Fleming, to his credit, was delighted to take the suggestion and equipped Bond with a Walther PPK in Dr No. He said he would pay Boothroyd for the advice and offered to recommend him to any company who might film the Bond books. How many authors would do that today?

As a final gracious gesture, Fleming gave Bond's armourer, Q, a name for the first time in Dr No: Major Boothroyd. It wasn't the only time he borrowed someone's name: Blofeld and Scaramanga were both named after boys he knew at school.
Posted by Paddy at 4:07 pm 1 comment: