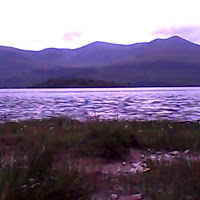 I am writing this while sitting on a rock beside a lake in southwest Ireland, looking across at the mountains. My day job (I'm in Killarney for the Irish Open golf) takes me to some pretty astounding offices.

The gentle lap-lap of the water is the only sound that disrupts this corner of heaven. That and the slight pounding in my head. Was it really wise, having risen at 4.30am yesterday to fly to Kerry, to stay up to 3am on my first night here? Of course it was, there was singing to be done.

We don't do pub singing very well in England. On the rare occasions when anyone does start to sing in an English pub, it is the boorish, chanty, chavving footballer type of song. The sort that has barely any discernible words and even less of a tune. Why are the Irish more charming drunks than the English?


There are few pubs that put on live music and even fewer that do it well, with the punters encouraged to join in. I know of one glorious place in Marylebone that does old-style roll-out-the-barrel Cockney piano nights, but it is a rarity.

In Killarney, every pub has a sign outside boasting of live music. Purely on a whim, I chose O'Connors.
There was a man with a guitar and a man playing the spoons as percussion. And there was a tap dispensing black liquid and much love in the room. After a couple of glasses of the black liquid, I started to join in as the pub sang along to the guitarman.

I didn't know many of the songs, but I could pick up the refrain. When it came to the ones I did know, like the Fields of Athenry or Streets of London, I belted it out with passion. I suspect at this point my wife, if she is reading, is cringing.


At 11.30pm, the guitarist packed up but the pub was not finished. One by one, the punters took it in turns to start a song and everyone would join in as soon as they knew it. We did County Roads, we did The Gambler, we sang You've Got a Friend. A pubload of pissed men (and a few women) singing Carole King. Beautiful.
One jolly fellow called Fergal, a man with an astounding tenor voice made for the stage, serenaded an American lady with La Vie en Rose before doing a couple of numbers from My Fair Lady. Another guy did the obligatory Danny Boy, although his knowledge of the words extended only to the title. No matter.
And then it was the turn of the Englishman. National pride at stake. What to sing? What could I remember the words to at midnight after several pints? I took a sip, opened my mouth and began: "I'm sitting by the railroad station, got a ticket for my destination..."

At which everyone joined in "ooh-e-oohh. On a tour of one-night stands, my suitcase and guitar in hand..."

Yes, Simon and Garfunkel was a good choice. American Pie followed as an encore. After that, everyone told me how much they loved the Queen coming to visit Ireland.

The evening didn't end there. Fergal dragged me along to another pub where there was a fabulous rock group playing covers of everything from Abba to Hendrix. A bearded Goth with tattoos all over his body and the voice of Robert Plant led the way. More singing. More drinking. At three pints for ten euros it would be rude not to.

I crawled off to bed when the music finished. I'm sure that if I had wanted, Fergal would have found somewhere else doing a gig but by that stage my vocal cords were shot. And I'm a professional, I had work the next day...

Will Twitter kill the blogosphere star? It's been two weeks since I last blogged here and yet I seem to spend more hours than are really necessary or even enjoyable on that silly micro-blogging site bashing out quips at 140 characters a time (you can follow me @patrick_kidd if you like).

Still, it's not as if there has been much to write about in the last fortnight. Apart from the former head of the IMF getting off a rape charge, the final flight of the Space Shuttle, the creation of a new country in Africa, a famine in Africa, the world's first synthetic organ transplant, England winning a one-day cricket series and Betty Ford dying, what else has happened?

Oh yes. A 168-year-old newspaper was closed and 200 journalists put out of work. Any job losses in any industry is a tragedy - and some have fairly pointed out that the News of the World had not done too much blubbing over public-sector redundancies - but the death of the Screws is tremendously sad.

It is not that it was a great newspaper (I guess I'm not its core audience, but I always thought it was pretty dull and awful), but it was a success as the 7.5 million readership attests. Most of the staff and, by reputation, its last editor were honourable, hard-working people who had nothing to do with the phone-hacking scandal. I'm still not really sure why the paper had to go.

Advertisers were pulling out all over the place after the claim that the paper had hacked into Milly Dowler's voicemails, but the paper could still have been saved if those who were seen as responsible for its brand becoming toxic had gone.

I don't want to excuse the News of the World's tactics. Hacking into the phones of murder victims and the families of those killed in war or on 7/7 is disgraceful; hacking into those of celebrities a bit tedious (as bad as reading their Twitter, I imagine) but nonetheless illegal.

But how many of those who did it were still working at the paper? And how many other papers have done the same? A study by the Information Commissioner's Office in 2006, highlighted in this week's Spectator, revealed that 139 Mirror Group employees and 91 who worked for the Mail had paid for obtaining private information. At News International, there were 30.

The practice was not that common, but it was universal and it should be the perpetrators - on all papers - who get punished, not the innocent subs, designers, brief-fillers and gardening correspondents. Closing one paper and putting the innocent on the dole queue is like hacking off an arm to cure a nose bleed.

It's the freelancers I most feel sorry for; they won't even get a pay-off and will have to join a very congested marketplace. Perhaps many of them will be rehired to staff the proposed Sun on Sunday, but that also raises the question of why the News of the World had to shut. It was the subject of phone-hacking that was toxic, not the paper.

If we were to close down something and change its name every time there was a scandal, we may as well do away with Parliament and open Congress because of the MPs expenses. It does not allow for redemption.

It was the suddenness of the decision that proved so shocking. Few saw it coming, not even Mystic Meg. I was one of the first to tweet the news on Thursday, not through any great connection that I have but because I was one of the few to wade far enough down the email that was sent to all News International staff by James Murdoch. It was two thirds of the way down before he said "By the way, you're all fired. Release the hounds." I imagine most colleagues had given up reading by then.

There was genuine shock and bemusement in the Times newsroom when rumour spread. The Times editor, who had only been told himself half an hour earlier, came and addressed the troops briefly and with dignity, saying that our paper was not tarnished by allegations and that we should continue to set the standards for professionalism in our trade.

As I left the office that evening, the crowds spilt out on to the plaza from the nearest pub. Wisely, the News of the World staff were taking to drink, joined by colleagues from The Sun. It was claimed by some on Twitter that the Sun staff had gone out on strike in sympathy. They hadn't, but they wanted to down a couple with their friends. It would have been nice if Rebekah Brooks had put her card behind the bar.
Posted by Paddy at 11:55 am 3 comments: