Once in Rahul Dravid's City 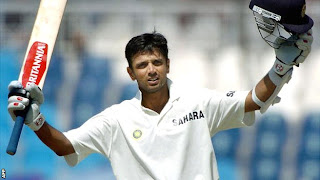 If it were not for the fact that he has intelligence, humility, integrity and a genuine love of the game and respect for its fans, Dravid would make a fabulous cricket administrator.

Such virtues would count against him in the snakepits of the BCCI or ICC, although sitting by him at the press conference were two other former India players turned administrators who share Dravid's values: Javagal Srinath and Anil Kumble. They breed decent men in Bangalore.

Who knows where his new career will take him, but when India next play a Test match, in Sri Lanka this autumn, it will be without the man who has been the rock of their middle order for 16 years.

I was there at the beginning, sitting in the Compton Stand at Lord's, when this skinny kid came out for his Test debut at No 7 with India in a bit of difficulty at 202 for five. He stayed at the crease for more than six hours, making 95 before edging a ball from Chris Lewis to the wicketkeeper.

Though frustrating for him to fall shy of a hundred on debut at Lord's - something only five men, including his fellow debutant in that match, Sourav Ganguly, have done - Dravid's resistance showed his remarkable temperament. It was the first brick in the construction of the Great Wall of India.

Dravid may be turning grey at the temples but he has stayed skinny, not piling on the pounds like some of his team-mates. He never lost his monstrous appetite for runs, though.

He faced 31,258 balls in the name of Indian Test cricket and was dismissed by just 254 of them. Only three others have faced even 23,000 balls in Tests; Dravid's aggregate of 13,288 runs in Test cricket is surpassed only by Sachin Tendulkar.

How blessed India has been to have twin supernovas batting together for so long. Together, they put on a record 20 century stands in Tests for India and Dravid shared a further 68 partnerships worth 100 or more in his 286 Test innings. He may not be everyone's choice as the man to bat for their life, but he is surely the man you wanted at the other end.

His finest hour (or seven and a half hours) was no doubt the 180 he made at Calcutta in 2001, sharing a stand of 376 with VVS Laxman that grasped victory in a long-dead Test against Australia, one of only three times in history a side has won after following on.

But there are plenty of other great innings to cherish. We saw a lot of Dravid's best in England, where he made six of his 36 Test centuries. There was the 148 at Headingley in 2002 that set up India's first win in this country for 16 years, his 217 in the very next innings at the Oval (I was in the Laker Stand for that), or the 117 he made when pushed into opening at Trent Bridge last summer, batting for all but 15 minutes of India's first innings.

That was a miserable tour for India, but Dravid remained their ray of light, averaging 77 in the Test series - more than twice the next man. In what turned out to be his final Test match here, he opened the innings and carried his bat to the close for 146, one of six men (including Len Hutton and Herbert Sutcliffe) to bat undefeated through a Test innings at the Oval.

His farewell press conference was as respectful and modest as you would expect. "I just knew the time was right," Dravid said. "You know deep down that it is time to let the next generation take over."

I hope they measure up to Dravid not just in quantity of runs, but in the way they approach the sport. "It was about playing with dignity and upholding the spirit of the game," Dravid said. "I hope I have done some of that. I have failed at times but I have never stopped trying." Is there a better manifesto for life?

He ended by praising the average Indian cricket fan. "The game is lucky to have you and I have been lucky to play before you," he said. No doubt the affection is returned.
Posted by Paddy at 1:58 pm

fantastic cricketer and a gentleman to the core. We will all miss you. Congrats on your wonderful achievement for India over the last two decades. All the best for the future.

As I've tweeted and written myself, I was also at Lord's in 1996 and there was a real sense of the coming of a new Indian batting dynasty with both Dravid and Ganguly making runs on debut.

As usual I've gone for a more impressionistic account but I'm glad you mentioned a few of his best innings before last summer, especially the one at Headingley in 2002, which has also stuck in my mind.